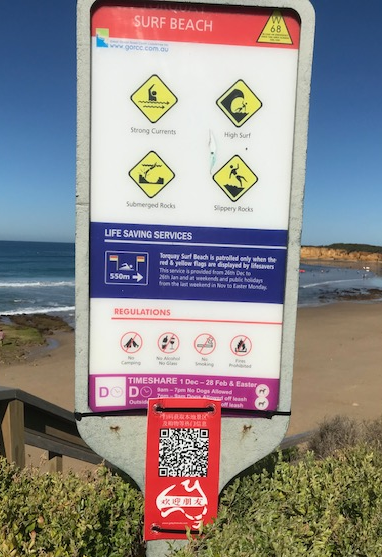 Tragically, Victoria recorded 26 drowning deaths over the 2018/19 summer, only two deaths below the 1997/98 record of 28 drownings. This comes as record numbers of people flock to the Great Ocean Road, with annual visitation predicted to rise from six million to 8.6 million in the next 10 years, driven largely by Chinese visitors.

While not heavily adopted in Australia, QR codes are very popular with Chinese visitors who are currently the largest tourism group to Australia, and specifically to the Great Ocean Road. In the last 12 months, 1.4 million Chinese tourists visited Australia; more than 2 million annually are expected in the next few years.

As part of the initial trial, G’Day Friends QR codes will be placed at Torquay, Eastern View, Anglesea, Fairhaven, Lorne and Apollo Bay.

Read the Surf Coast Times article about this important and exciting initiative.

To learn more about how QR codes are helping Chinese visitors and the Aussie businesses that serve them, go to gdayfriends.com.

About the Author: Bill Lang

Bill Lang is a business educator, coach and adviser across a range of industries and countries. An MBA from Harvard Business School laid the foundation for a 30-year career devoted to helping business owners, leaders and team members build skills and implement strategies to achieve incredible results, including capitalising on the significant opportunities presented by Chinese customers at home and abroad.